Below is a listing of our much loved, and missed, family of Pointers, who have since gone on to the Rainbow Bridge.
Our lives have been forever changed by their time shared with us.
If available, please click on a dog's name to be taken to their personal page.

"Buddy left us after a short illness. He was loved by anyone who met him."

"She was a trooper right to the end." Her sister Luna misses her as much as the family. 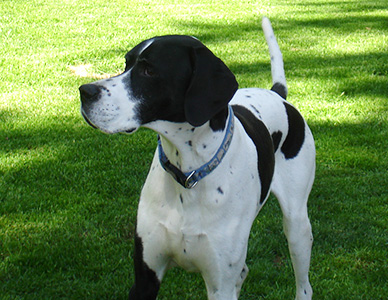 Yogi came to our home in Naramata at 8 weeks old.
His favorite activity at that age was to attack your shoe laces pull on them and then take off.
He was always loving and never had a mean bone in his body. He was a very gentle dog by nature and loved by all.

Sage at play on her annual trip to Oregon. She will be missed dearly by her family Terry, Kelly, Olivia and Liam.
She left us peacefully at home in our arms on April 25 2014.

Little Kay came into our lives in 2002 and was immediately an important part of our family.
She enjoyed playing with the grandchildren and was a favorite of friends and visitors.
She loved hikes and walks in the back country with other dogs and especially with her pal Billy.
For every kilometre we walked, they did at least two, running through the trees and exploring.

He ruled the roost at Nowwithem even to the last day. Great dog and many great memories.
Rest in Peace Ceeps!!!

Shasta spent her life hiking with her Hiking Guide owners on our dream property near Mount Robson BC. She hiked, backpacked & accompanied us on horseback for hundreds of kilometers through the mountains, carrying her own pack & wearing her signature red neoprene boots.
Read the full tribute on Shasta's page. 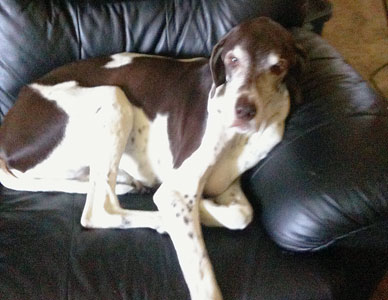 A wonderful companion for over 14 years, Chelsea is missed by Erin and her family.

Tragically died at a young age. HIs family has lost a wonderful dog but has some great memories.

When you are sorrowful, look again in your heart and you shall
see that in truth you are weeping for that which has been your delight.

Can. Am. Ch. Nowwithem Billy The Kid, FDJ, JH

Billy joined us October 2002 as a five year old and fit right in to the household within days of his arrival.
He was new to walking in the woods and spooked at some of the unfamiliar sights and sounds but soon became very comfortable on our walks and hikes.
He developed a good nose for bears and would stop and stare at a spot until the bear came into view.
He had no interest in chasing them, but seemed content just watching. I learned to count on him and
he kept me from a number of close encounters with black and grizzly bears.

He loved being around the grandchildren, but Amanda was his favorite to snuggle with when she visited.

Billy left us in early 2009 and is sadly missed by all who knew him.

BIS, SBIS, Can., Am. Ch. Nowwithem Accept No Substitute x Can. Am. CD, FD, JH x Can. Ch. Nowwithem Deringer
Loved and cuddled by Leanne and Ken Leroy.

She passed on to the Rainbow bridge leaving behind two wonderful litters.

Her progeny have finished their championships and will carry on her wonderful temperament and hunting abilities.

He left behind many hardships that we faced together due to his color. Tri will be remembered by his close friends
and followers for setting a very high standard of excellence. I miss you T-Dog.

The best brood bitch and bed buddy of the bunch.  Though never shown or hunted over,
Annie will be missed in many other wonderful ways.

Left behind many tears and after having many hardships, he is sadly missed by his last owner, Joy.

Foundation bitch for Ann Lowery,
Kelly is missed by her four footed sons and daughters and of course, Ann's children.

The only child (dog) of John and Joanne.  He is greatly missed by their cats as well.

The love of my life who has gone but will always be # 1.

He has gone to Rainbow Bridge but I will never forget him.